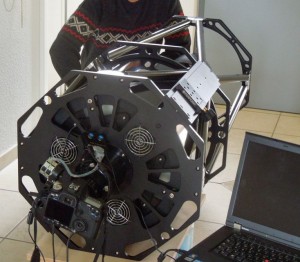 END_OF_DOCUMENT_TOKEN_TO_BE_REPLACED

I very well remember the first time that I saw M31. I was thirteen years old and it was a frosty November night. I laid flat on my back and I was absolutely certain to see this damned beast through my binoculars. Yes, I had tried very hard. It was exciting and disappointing in the same moment. It took several attempts, but nothing was there that could be compared with the famous Mount Palomar images which I knew from the textbooks. Messier 31 was only a dim nebulous patch in the sky, but it was there and those ancient photons, which reached my young eyes, had traveled for 750,000 years. Unbelievable. I forgot to mention that this observation was made at the worst astronomical observation site on earth: in the very heart of the Ruhrgebiet, a big industrial region in western Germany, that was still very active at those days and nights.

Later, when I had doubled my years, I learned, that new observations had also doubled the distance to M31. Meanwhile I am more than 5 times older and the Andromeda Galaxy is more than 2,400 000 light-years away. But let us get serious. It is quite certain, that the distance to M31 is shrinking second for second for several hundred kilometers and it is of course not a function of my personal age.

Next to the Magellanic Clouds which belong to our own Galaxy, the Andromeda Galaxy is the nearest extra galactic system (perhaps), and of course it is not boring to observe. It is the largest member in our Local Group of Galaxies. As it is with every thing else, the more you know about it, the more interesting it is.

Beside the not easy to see spiral structure, which is obvious visible on every photograph, there are several details to observe even with modest amateur equipement. Yes, it is true, that it takes the Hubble Space Telescope to see so much detail in any Virgo galaxy, as best amateur images reveal about the secrets of M31.

The image gives an overview of this nearby galaxy and the two accompanying systems M32 and NGC 205, sometimes called M110 (on the right side).